On Monday, February 4, 2019, the State of Louisiana reduced an aggravated assault upon a peace officer charge against Mr. Christopher Townsend to a misdemeanor.  Mr. Townsend was arrested on February 21, 2018 after an accident with a reserve deputy in his private vehicle.  Mr. Townsend told law enforcement that he saw the reserve deputy who was in no way identifiable as a police officer retrieve a firearm after the accident, and he fled fearing for his safety.  The reserve deputy gave chase throughout Covington, and discharged rounds at Mr. Townsend’s vehicle’s tires in order to force him to come to a stop.  Mr. Townsend was arrested as law enforcement arrived, and despite both State Police and Covington PD being at the scene, the St. Tammany Parish Sherriff’s Office elected to investigate the incident involving their own reserve deputy.

Mr. Townsend was arrested, and held on an $80,000.00 bond.  Mr. Shah was retained to represent him in June of 2018 after Mr. Townsend and his family were dissatisfied with the services of a previously retained attorney.  Mr. Shah immediately was able to identify weakness in the State’s case and moved quickly to get help for us client.  Within a month, Mr. Shah was able to secure a reduction of the bond to $10,000.00 allowing Mr. Townsend to bond out and to continue fighting his case from home.  Eventually Mr. Shah was able to negotiate a plea deal to a misdemeanor and credit for time served, when Mr. Townsend initially faced up to a ten year prison sentence. 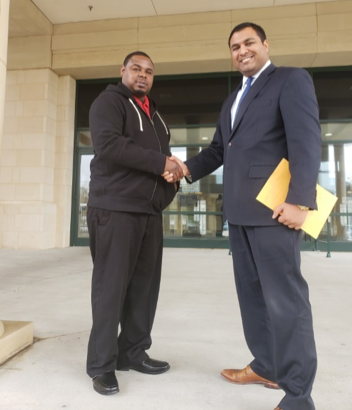